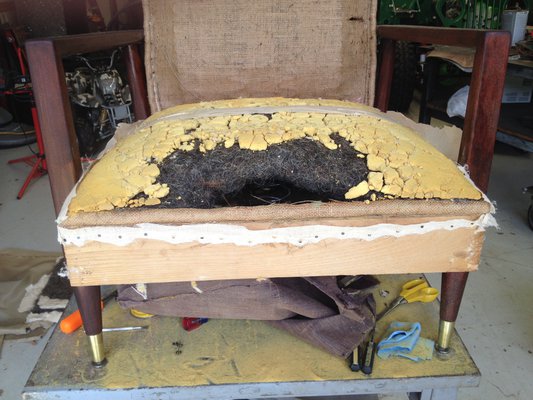 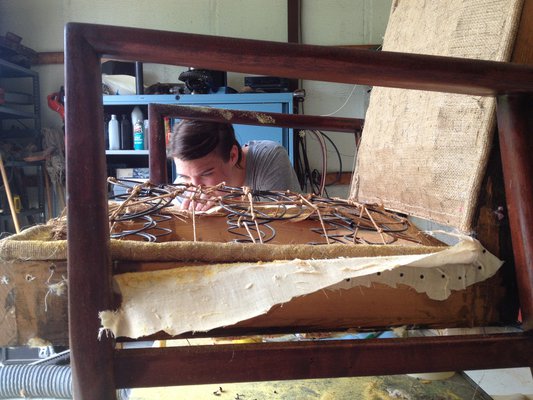 Anyway, I'm moving into an apartment soon and need a cabinet to put a TV on.  I considered buying one at first, but ultimately decided that I'd like to try building one myself.  I really like mid-century modern furniture. Conveniently, much of it is fairly simple in design.  This further convinced me that I might be able to build a TV cabinet myself.  I looked at a bunch of plans that other people posted online, but none of them were exactly what I had in mind so I set out to design my own.  While I worked on my design I made several trips to the hardware store to scope out available materials and to get an idea of what they would cost.  Before I started I figured that I could build the cabinet for less than I could buy a really cheap, comparable cabinet from a retailer.

Before starting this project, I knew very little about joinery, but could visualize the joints that I was going to need to make.  In order to associate a name to the joints I had imagined, I started reading DIY articles and watching woodworking videos.  As it turns out I needed two different joints to build the cabinet, a dado joint, and a rabbet joint.

My grandfather kept a well equipped woodshop and I knew that he had a dado blade and a radial arm saw that I could use to make these cuts.  The radial arm saw was ideal compared to a table saw because on the radial arm saw the blade was very easy to change and it allowed us to easily switch between cross-cutting and ripping configurations.  We switched between the dado blade and a general purpose crosscutting blade numerous times during this project.  There are different types of dado blades.  Some are made up of a stack of standard saw blades that are stacked together to achieve a desired width.  The type that we used was a wobble-type dado blade.  In order to achieve different kerf widths, the wobble-type dado blade is made up of a single saw blade that is sandwiched between two wedged cylinders.  By rotating these wedges along the axis of rotation of the blade a continuous range of kerf widths can be achieved.  When the blade rotates it wobbles.  When spun with enough speed this blade cuts a much wider path than can be achieved with a standard saw blade.  I put together an animation that I hope better explains how a wobble-type dado blade works.

Deciding on a height to width ratio was difficult.  It was not until I drew out my design to scale that I decided on 2' x 6'.  When doing this I also took into account the size of TV I intend to sit on top of the cabinet and how high I wanted it to be off the floor considering sofa height.  Once finalized I bought the materials.  I bought 1' x 8' x 5/8" lumber made from various widths of various lengths of various types of wood all put together end-to-end like butcherblock.  Also worth noting, in the store were two types of this lumber.  One type was "stain grade" and the other was "paint grade".  The stain grade type was about twice as expensive as the paint grade as it didn't have any knotholes and had a slightly more smooth surface.  I like the character that knotholes add to a piece of wood and therefore opted to buy the paint grade lumber.  Of course, I was choosey about which pieces that I bought making sure they were free of major blemishes and that I liked the grain pattern of each particular piece.

We started by cutting the end pieces as their size dictated much of the overall cabinet dimension.  After these, we cut the top and the center shelf.  Following each cut we mocked up each joint and made sure that they fit as desired.  Careful measurements were critical throughout this project as many of the joints are visible and also provide much of the structure of the cabinet.  Next we cut the two, top center dividers.  The cabinet top, sides and center shelf make up the most rigid section of the cabinet.  We glued and nailed (with a nail gun) these pieces together as a single piece and let the glue dry over night. 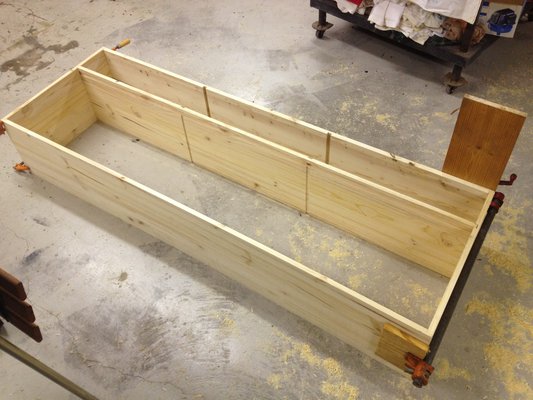 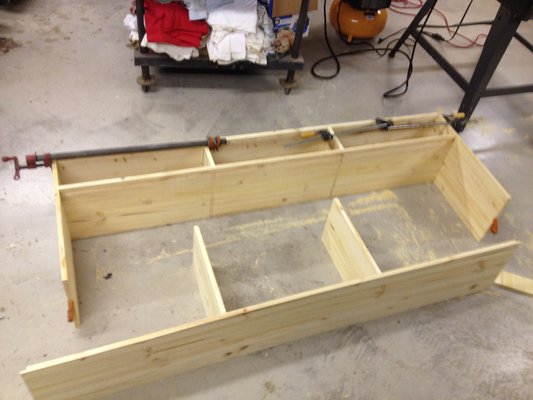 This gave us a nice structure by which to attach the bottom of the cabinet, its dividers, and door.  Again, after cutting these pieces we nailed and glued them into place and clamped them to dry over night.  The door, of course, did not receive any glue or nails as it slides along a track that spans the entire width of the cabinet.  Once the cabinet itself was finished I added four tapered legs that I bought at Lowe's.  They were the perfect length and had the look that I was going for.  Besides, I doubt that I could have ever made a set of matching legs on the lathe.  I chose to inset the legs 1/6th the length of the cabinet from each end as this seemed to be symmetrically pleasing.  Also worth noting, is that I wanted the front set of legs to be as far from the back set of legs as possible to give the cabinet as wide of a footprint as possible.  It is narrow enough as it is.  To do this, I placed the front legs about 1.5" from the front of the cabinet.  -just far enough back such that the leg mounting bracket cannot be seen and I placed the rear leg mounting brackets so that their outer most edge is flush with the back side of the cabinet.  The idea was, who cares if the bracket is visible from the back, the back of the cabinet is not meant to be seen. 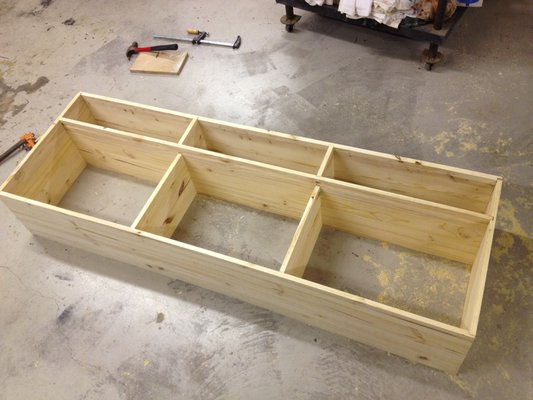 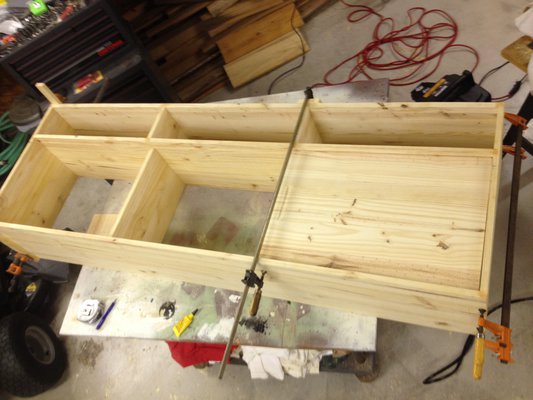 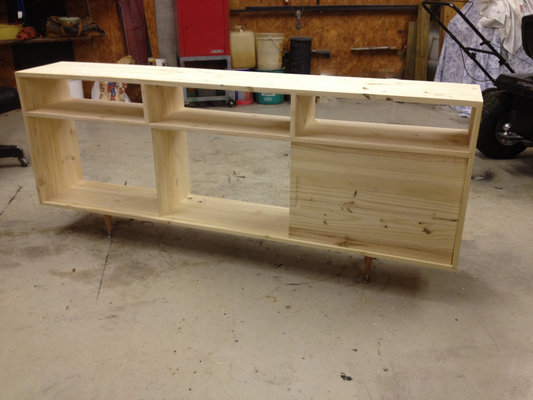 The door deserves some attention, as it had to be made from two pieces of the 1' x 8' x 5/8" as it is taller than 1' and I wanted the grain to run horizontally.  To join the two pieces, we simply covered each joining surface with wood glue and clamped them together with bar clamps and allowed them to dry overnight.  Despite my skepticism, this resulted in what felt like an extremely tight bond.  -I wasn't willing to test its strength though.  I went back and forth trying to decide what type of handle I should use on the door.  At the hardware store, I looked for the simplest handles and drawer pulls they had.  What I finally decided was that any handle or pull that had to be attached was not simple enough.  It was my dad who suggested that we use the dado blade to cut a slot in the door to act as a handle.  His idea was perfect.  We drew out on the door where we wanted the handle to be.  My dad helped me operate the radial arm saw for this cut as movement along two axis was required at once.  The spinning blade had to be plunged into the blank door and then the door had to be pushed into the blade to achieve the desired handle length.

Once sturdily assembled, I used wood filler to cover all nail heads and to fill any remaining gaps in the joints.  When dry, I moved on to sanding the cabinet.  There were slight imperfections surrounding all joints that I was able to sand out, among other slight surface blemishes.  I took great care in sanding all front-facing surfaces as I wanted those joints to appear seamless.  Primarily using a palm orbital sander, I spent two entire evenings doing nothing but sanding this cabinet perfectly smooth.  In some of the more stubborn places, I did carefully use a handheld belt sander.  This was only necessary on the back of the cabinet.  When fitting the joints, we made sure to make joints visible from the front of the cabinet fit perfectly.  This pushed whatever slack there might have been to the rear to be corrected later with more aggressive sanding .  I must admit that the back of the cabinet does not look nearly as good as the front.  That's why it's the back, right?! 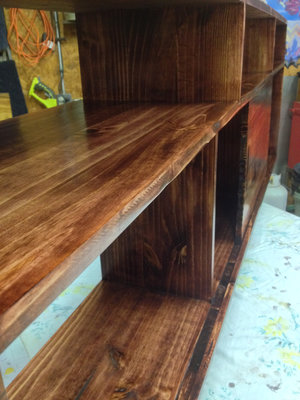 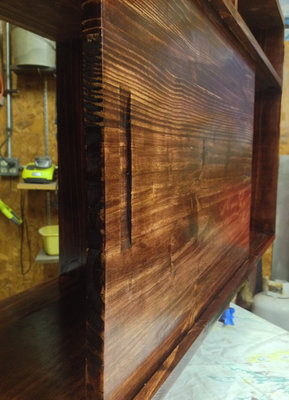 To stain the cabinet, I used the same stain that I used to refinish the chair that I mentioned;  Minwax 'Red Mahogany' #225.  I like this stain because it has a slight red tint to it without being overpowering.  Once completely dry, I very lightly sanded the entire cabinet with a worn out Scotch Brite pad to knock off any debris that might have stuck to the surface while the stain was drying.  After removing any dust left on the cabinet with compressed air and a tack cloth, I applied two coats of satin Minwax polyurethane allowing one day for drying between each coat.  Also between coats of polyurethane, I ever so lightly sanded the entire cabinet, again, to remove any debris that might have embedded itself in the clear.  This also served to knock down any brush marks that might have been present.  I didn't notice any at the time thanks to a quality brush that others encouraged me to use.  Prior to this project I had always used cheap brushes when applying clear.  -never again.  Quality brushes definitely make a difference, contrary to what I previous believed.  Before applying the second coat of clear, I noticed a run or two in the first coat despite copious amounts of attention directed at preventing such a thing -it happens, I guess.  I sanded these areas with an extraordinary amount of care just enough to knock down the height of the run to match that of the surface surrounding it.  Extreme care was important to avoid sanding through any layer of finish already applied. 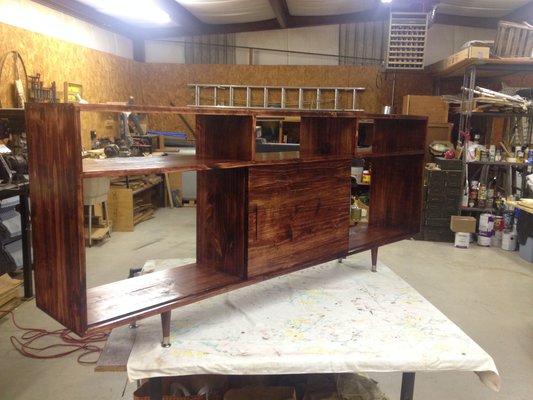 I couldn't be more pleased with how it turned out.  My dad's expertise and help, were absolutely paramount to the success of this project.  I know that.  Anyone reading this should know that.  He'd deny it.  -but it's true.

The Dado Joint diagram, is a derivative work of Wikipedia user ZeroDamage.  That particular image is licensed under a Creative Commons Attribution-ShareAlike license.

The Dado Blade image, that is the basis of the dado blade animation, is a derivative work of The Noun Project user Daniel Garrett Hickey.  That particular image is licensed under a Creative Commons Attribution license.

Again, my dad's help was enormously important to this project as was my grandmother's encouragement and allowing me to stay at her house until 11:00 every night for two weeks straight.